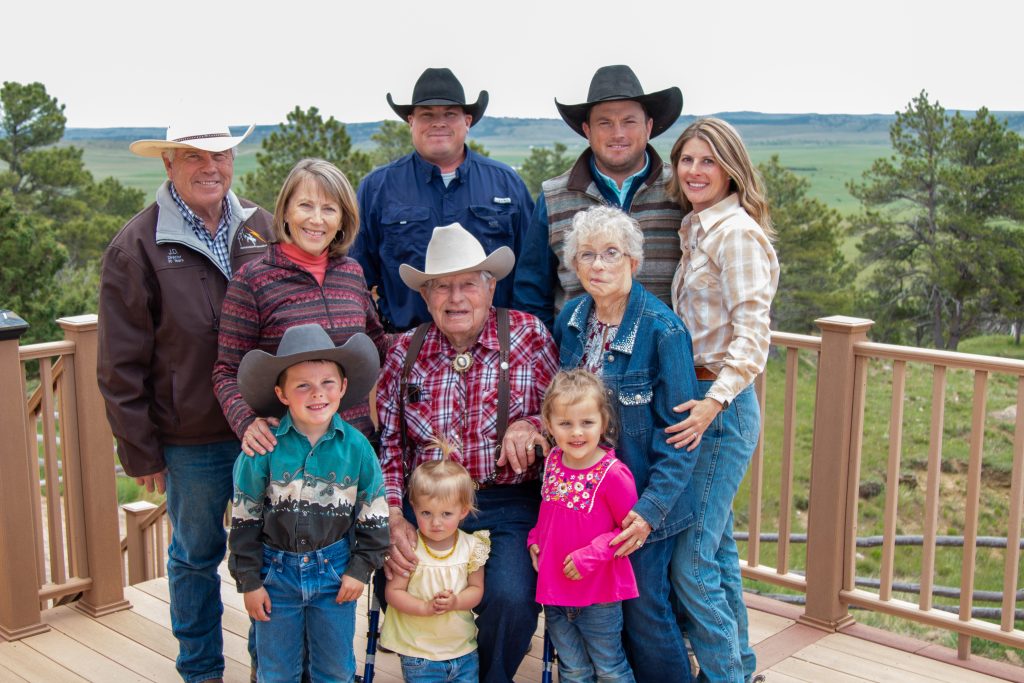 The Wasserburger family of Lusk accepted the 2022 Certified Angus Beef (CAB) Commercial Commitment to Excellence Award at the CAB’s Annual Conference Sept. 29 in Phoenix, Ariz. They earned the award for their herd’s impressive maternal and marbling scorecards.

“It means a lot to our family to win this award,” says Andrew Wasserburger. “Everyone knows ranchers work hard, and it’s nice to have some recognition every once in a while for the people who are trying to do the right thing and move forward to make the industry standard a little stronger so people feel safe about where their food comes from.”

The ranch was established as a homestead in 1916. It was built on family legacies of pioneer great-grandfather Henry and his son Henry Jr., and is now led by JD and Laurie Wasserburger, with their sons Eric and Andrew and his wife Anne.

According to the Bootheel 7 Livestock website, “Our herd genetics have been fine-tuned for just as long and are the reason we consistently provide the most tender and flavorful beef possible. Over the years, the ranch has endured floods, droughts, blizzards and everything else nature could throw at it. Persistence, perseverance and a commitment to the highest quality practices have remained our focus.”

According to a CAB news release, “About six years ago, the family started ultrasounding potential replacement heifers to gain a clearer picture of marbling ability and ribeye size and soon moved to scanning every heifer on the place. Sorting ensures every keeper has the targeted 1.1 square inches of ribeye per 100 pounds of body weight and an intramuscular fat score over 3.5 – the threshold for Choice marbling.”

This year, the family focused on analyzing maternal, carcass and performance traits in their heifers with genomic testing.

“The Bootheel 7 steers handily won the Nebraska-based TD Angus Feed Test ‘Highest CAB Percentage’ category two years in a row with pens at 64 percent and 65 percent CAB and 100 percent Choice or higher. They topped the Percentage Prime category, too,” according to CAB.

“But we didn’t win ’em all. That means we still have a lot of work to do,” Eric says.

Changing with the times

Like generations before, Eric and Andrew looked for every opportunity to expand the operation. They added farming to the mix and most recently built a grow yard for another element of control in cattle marketing.

They realize the importance of changing and evolving with the times to ensure the ranch is competitive in today’s market.

“I think it’s more important now than ever to be willing to change,” says Andrew. “Beef demand is at an all-time high, and as the younger generations come up, consumers want to know where their food comes from, and they want to know it’s safe to feed their family.”

He notes it’s important for producers to stay ahead of the times to be able to market their products to consumers.

“Ultimately, the end goal for everybody is to enjoy good beef, and it’s important people understand this,” says Andrew.

Andrew notes implementing technology on the ranch has improved their operation significantly. Carcass ultrasounding, genomic testing and tools for measuring water consumption are just a few ways the Wasserburgers utilize technology on their ranch.

“Technology helps us save money where we can and be more sustainable so this operation can last another 100 years,” Andrew says.

He notes the importance of being able to read expected progeny differences numbers and genomic numbers, which can sometimes be difficult to understand.

“There’s sometimes a barrier there with ranchers and older folks on ranches who need help understanding how to use technology to make everything better and easier,” Andrew says.

The Wasserburgers are able to monitor their water systems through their phones now instead of having to manually go and check on wells and storage tanks.

Family is an important aspect at Bootheel 7 Livestock.

“Family is huge to us,” says Andrew. “It’s just a big support system.”

Andrew says raising kids on a ranch helps them understand the importance of hard work at a young age.

“They understand you get out of it what you put into it, and there’re a few things teaching you this, but ranching is definitely one,” he says. “People who can handle adversity and everything that goes along with ranching; the earlier you learn this, the easier life will be for you.”

The Wasserburgers aim to continue producing quality products people can feel safe eating, says Andrew, and they work to ensure the ranch will be in the family for generations to come.

“Hopefully, what we do today is moving in the right direction for our kids,” he says. “As long as the place is big enough to provide for more families who want to move back, that would probably be the goal.”

“It’s pretty hard for young people to get started now with the price of land, and inflation has caught ranchers everywhere,” he says. “Everything producers put into cattle is priced higher than it was five years ago, so it’s just being able to stay in front of all of this.”

Ultimately, it’s all about the quality of the product produced, says Andrew.