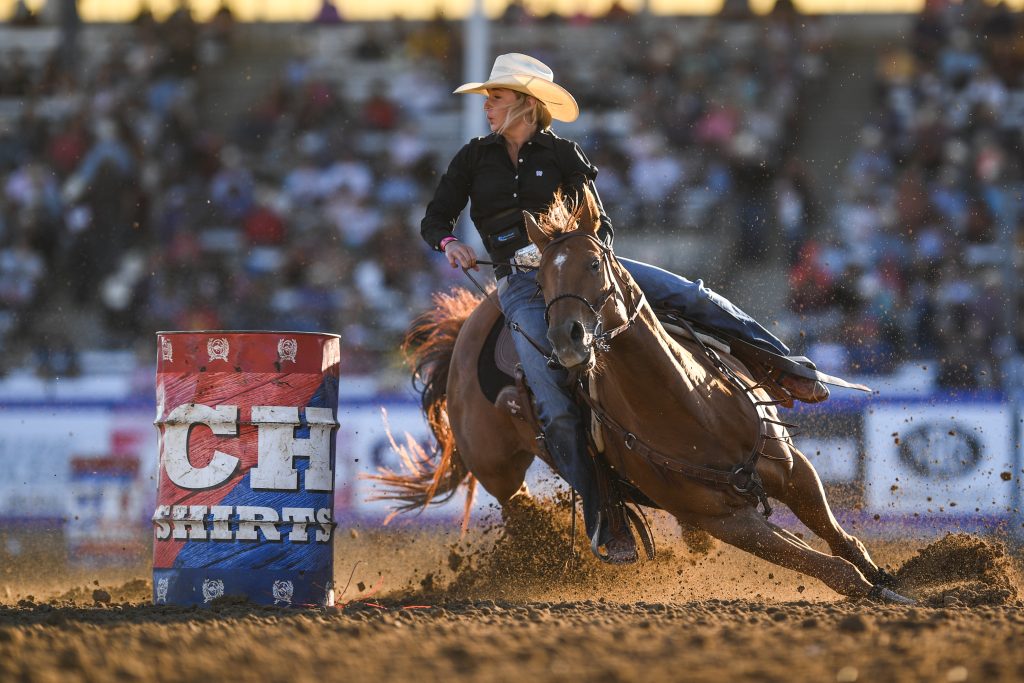 With a time of 19.24 seconds, James Arviso of Winslow, Ariz. and Cashton Weidenbener of Payson, Ariz. were named the NHSRA Team Roping Champions. Kenzie Kelton and Ketch Keton of Mayer, Ariz. went home with second-place honors. They rode for a total of 20.21 seconds. In third place, with a time of 20.77 seconds, was Kavis Drake of Moose Jaw, Saskatchewan, Can. and Colter Dune of Ogema, Saskatchewan, Can.

The NHSRA Tie-Down Champion, with a total time of 27.41 seconds, went to Tyler Calhoun of Richards, Texas. Cole Clemons of Okeechobee, Fla. went home in second with 28.2 seconds, and Mason Stueve of Newton, Kan. went home in third with 28.43 seconds.

Rounding out the roughstock events, Statler Wright of Beaver, Utah was named the NHSRA Saddle Bronc Riding Champion. He rode for a total of 229 points. Reserve honors went to Thayne Elshere of Hereford, S.D. with a total of 226 points. Finishing in third was Cooper Lane of Keller, Texas with 223 points.

Cody Gann of Leighton, Ala. was named the NHSRA Boys Cutting Champion with a total of 445 points. Will Bushaw of Weatherford, Texas took home second-place honors with 441 points. Billy DeLong of Winnemucca, Nev. went home with third-place honors, riding for a total of 436 points.

Riley Farris of Madisonville, Texas rode for a total of 438 points and was named the NHSRA Girls Cutting Champion. Sadie Mendenhall of Edmond, Okla. went home with a total of 437.5 points for second-place honors. Third place went to Brinley Lippincott of Cypress, Texas with a total of 436 points.

Ryley Wilson of Chilliwack, British Columbia, Can. was named the NHSRA Reined Cow Horse Champion with a total of 892 points. Emily Kent of Jacksboro, Texas went home with second-place honors, riding for a total of 890 points. Rounding out the top three with 888.5 points was Will Jones of Allerton, Iowa.

In the trap shooting competition, Chase Campbell of Utah went home in first place with a total of 200 points. Lane Picklo of Texas followed behind with 190 points. Rounding out the top three was Kolton Miller of Wyoming with 180 points.

In the long-go rifle competition, Beau Emett of Utah went home as the NHSRA Light Rifle Champion. In second place was Tate Welch of Colorado and Cash Brown of North Carolina in third place.

The NHSRA also crowned a new NHSRA Rodeo Queen on July 23. Activities kicked off on July 14 and contestants competed in a variety of categories.

All-Around, Horse of the Year and team standings

The All-Around Rookie Cowgirl went to Bayli Ladner of Klamath Falls, Ore., with a total of 210 points. Rayne Grant of Wheatland went home as the All-Around Cowgirl with 1,610 points.

In the overall team standings, Texas was named the NHSRA Team Champion with a total of 11,430 points, followed by Utah with 9,278 points and Wyoming with 7,981.36 points.