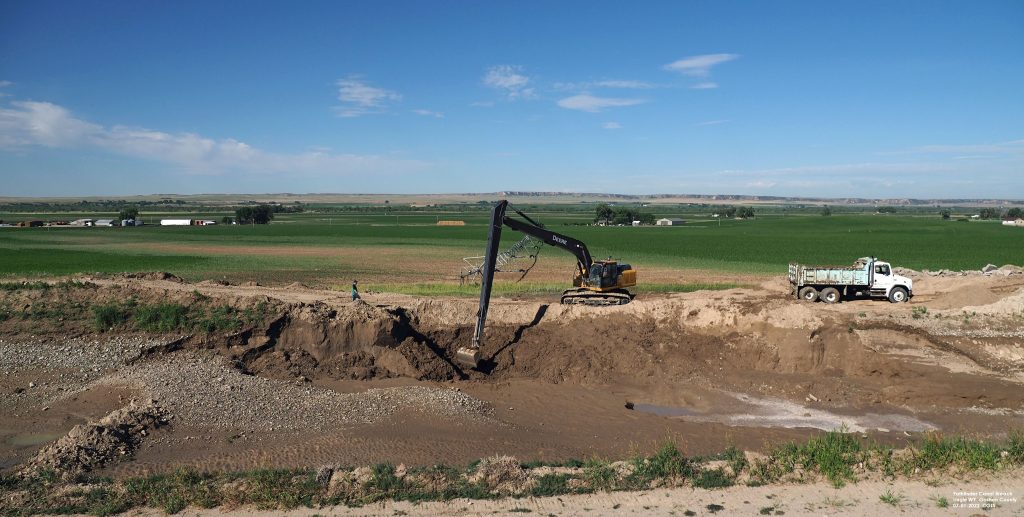 A breach of the Pathfinder Canal located west of Lingle caused extreme flooding in the area on July 1, leading to the evacuation of the community and the closure of U.S. Highway 26. The canal is over 100 years old and serves Lingle, Hill and Pathfinder Irrigation Districts (PID).

According to a Nebraska Extension news release, “The break was first noticed by a local grower who contacted the PID who manages the canal. PID sources believe the break occurred between 4:30-5 a.m. PID shut off the water diverted into the canal at Whalen Diversion Dam shortly after 5:30 a.m.”

However, due to the canal being full prior to the diversion, water was expected to continue flowing for the next 12 hours.

“At the time of breach, the canal was diverting approximately 1,800 cubic-feet-per-second. No injuries occurred as a result of this breach,” stated a U.S. Bureau of Reclamation (BuRec) news release.

BuRec also projected over 90,000 irrigated acres to experience a temporary discontinuation of water service, but estimated the canal would be returned to service within days.

“PID is on site working to place rip-rap in the breach to minimize flooding and retain as much water in the canal as possible,” continued BuRec.

“The PID and BuRec are assessing the situation,” said BuRec Wyoming Area Manager Lyle Myler. “We are responding as quickly and as safely as possible to return the canal to service.”

“I want to thank our state agencies for their quick response to this concerning situation and I praise them for their hard work and dedication to help minimize the impact on our citizens and communities there,” Gordon said. “Thanks to the quick and competent response from our state agencies, including the Wyoming Office of Homeland Security and the State Engineer’s Office, we were able to rapidly respond to the situation.”

Staff from the Wyoming Office of Homeland Security, the State Engineer’s Office and county officials were immediately sent to Lingle after the breach.

“Water was promptly diverted from the canal at the Whalen Diversion Dam and parts of Lingle were evacuated,” said Gordon.

Secretary of State Ed Buchanan was on the ground at Gordon’s request to survey the damage and estimate the amount of resources needed to assist the community.

“Secretary Buchanan has reported the local folks are working together to sandbag the canal,” said Gordon. “As I have said many times before, I am proud of our Wyoming people who do what they do best – helping neighbors.”

Gordon’s office has been in contact with Nebraska’s governor, as the majority of the water in the canal flows to Nebraska.

“We will continue to communicate with Nebraska officials as we work to resolve the issue,” Gordon said.

Although two homes and a small feedlot were flooded near Lingle, the breach did not cause serious washouts and there was minimal crop loss.

“However, the affected growers need to consider potential nutrient loss, particularly nitrogen, which may have leached or washed away,” Nebraska Extension said. “Also, any soil movement which may contain pesticides could affect the crops and should be considered.”

Nebraska Extension encourages producers affected by the flooding to consult with their crop insurance agent.

“Growers and individuals who may have insurable claims need to keep records of their crop management prior to and during the water disruption,” the release said. “Growers must manage their crops as if the water will return.”

Kaitlyn Root is an editor for the Wyoming Livestock Roundup. Send comments on this article to roundup@wylr.net