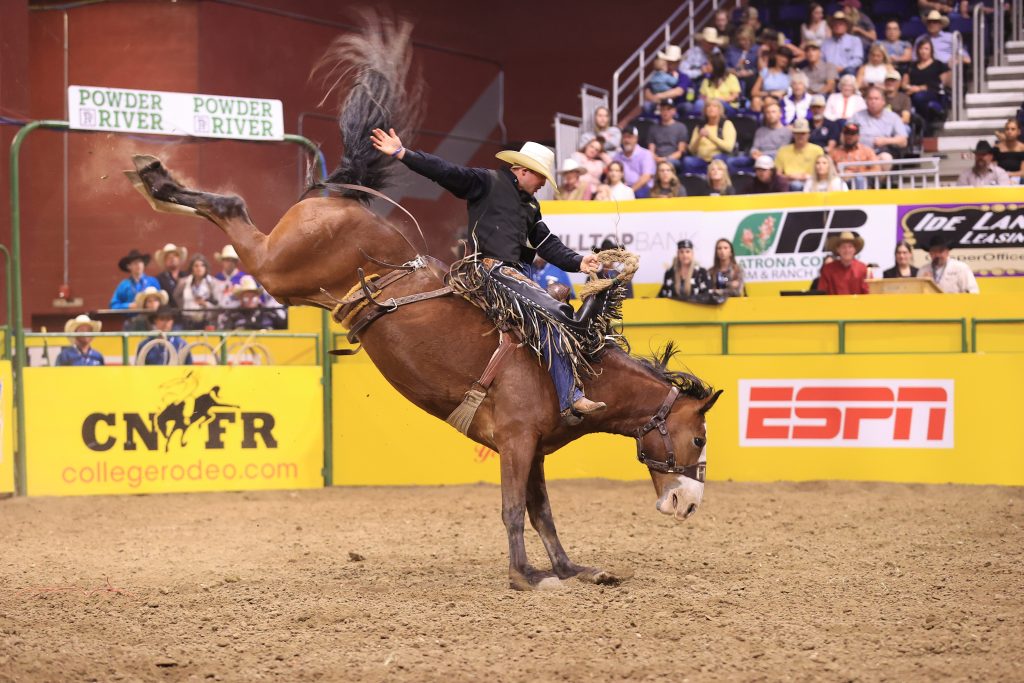 Cole Franks of MVC rode Vold Rodeo Company’s Spicy Chicken in the last round and scored 81.5 points, leaving him one point short of a championship title. Franks rode for a total of 317.5 points. He placed first in round one with an 83.5-point ride and tied for second in round two with Donny Proffit of University of Wyoming (UW) with a 79.5-point ride. In round three he placed ninth with Tyler Griffin of Southwestern Oklahoma State University (SEOKSU) with a 74-point ride and tied for second with Brice Patterson of UW in the short round.

The pair placed eighth in round one with a 7.2 second run. In round two, there was a two-way tie for eighth place with ropers Cooper Cowan and Cade Cowan, both with a time of 9.9 seconds. In round three they placed in a three-way tie for fifth place with ropers Brad Moreno of Central Arizona College (CAZC), Jaken Todacheenie of Northern Pioneer College, Cutter Machado of Cal Poly State University – San Luis Obispo (CAPSLO) and Wyatt Hansen of West Hills College with a time of six seconds. In the short round, the pair placed fifth with a 11.3 second run. The pair rode for a cumulative of 34.4 seconds.

Cash Wilson of TARLET went home with the reserve championship title with a cumulative score of 308.5 points.

The CNFR Tie-Down Roping Champion is Kindcade Henry of PANOLA. He rode for a cumulative of 38.1 seconds. In round one he placed first with an 8.4 second ride, and in round two he tied for sixth place with Linkyn Petersek of Casper College (CC) and Cody Stewart of Feather River College with a 11 second run. In the third round he tied for seventh place with Tanner Brown of East Mississippi Community College with a 9.7 second run and in the short go he placed seventh with a nine second run.

Trevor Hale of Cisco College set a new arena record in the finals with a 7.1 second run and went home with a total time of 39.7 seconds, earning him the reserve championship.

Maddee Doerr tied for 17th place with contestants Wacy Day of Northeastern Junior College, and Heather McLaughlin of University of West Alabama with a time of 6.6 seconds. In round two, she tied for second with Jaicee Bastian of Utah Valley University, Taylour Latham of UW and Sierra Spratt of CAPSLO with a 6.1 second run. In round three she tied for sixth-place with Emma Hodson of Weber State University, Kodey Hoss of WEATHR, Sheyenne Anderson of MVC, Sierra Spratt of CAPSLO and Jessi Portenier of COCHSE with a time of 6.3 seconds. In the short round, she placed second with a 5.9 second run.

The CNFR Barrel Racing Champion is Sadie Wolaver of SEOKSU. She rode for a cumulative time of 56.86 seconds. In rounds one and two she placed second with a 14.26 second run and 14.24 second run respectively. In round three she tied for third place with a 14.22 second run with Ellie Bard of Gillette College (GILLET) and Bryana Lehrmann of TXAMUC and in the short round she tied for third with a time of 14.14 seconds with Ellie Bard of GILLET.

Taycie Matthews of EMSCC went home with second-place honors with an average time of 57.23 seconds.

Casey Roberts of Three Rivers College won the CNFR Bull Riding Champion title. He was the only bull rider to ride three of four bulls. He placed first in round one with a 79-point ride, he placed third in round two with a 78-point ride, alongside TJ Schmidt of Panhandle State University, no score in round three and in the short round, he placed first with an 82.5-point ride. Roberts rode for a cumulative score of 239.5 points.

Tristen Hutchings of Sul Ross State University, who was the defending champion, finished as this year’s reserve champion with 167 points on two head.

The Men’s All-Around Champion is Cole Walker of University of Tennessee – Martin. He competed for a total of 270 points. Cole Dodds of California State University-Frensno came in second-place honors with a total of 245 points.

The Women’s All-Around Champion is Bryana Lehrmann of TXAMUC with 310 points. Kaytlyn Miller of Texas Tech University – Lubbock came in second with 198.3 points.

The Men’s Team championship title went to TARLET with a cumulative score of 900 points, MCNSU came in second with 780 points. MVC placed third with 770 points and CC placed fourth overall in the men’s team standings with 620 points.

The Women’s Team championship title went to Weatherford College with a total of 538.33 points, SWOKSU went home with second-place honors with 520 points in the national standings.