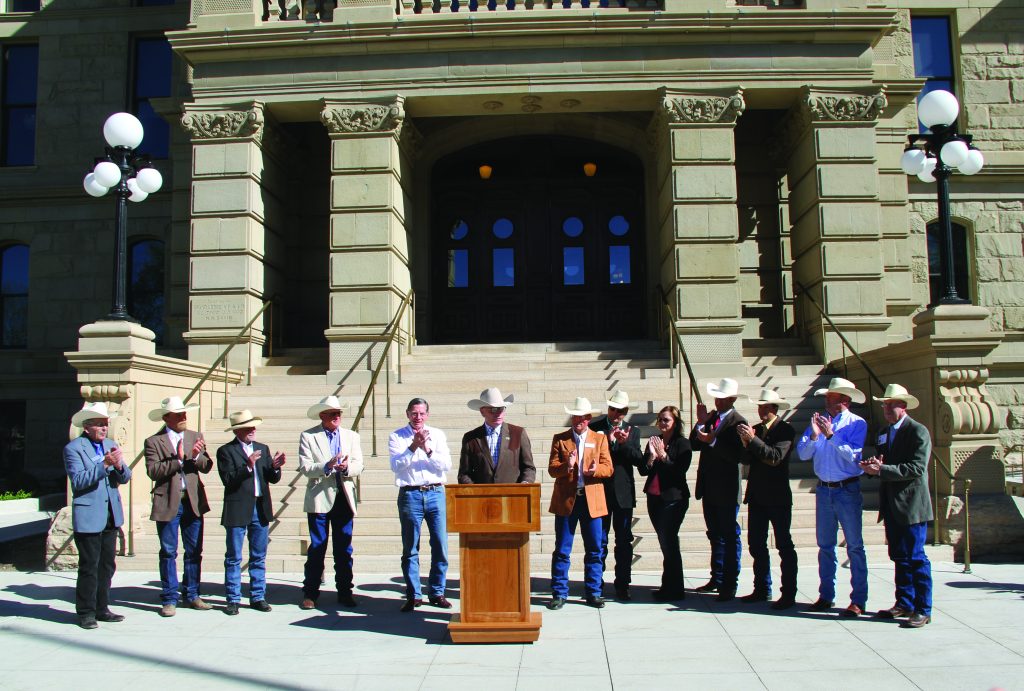 Cheyenne – Tthe Wyoming Stock Growers Association (WSGA) celebrated their 150th Anniversary Celebration and Convention June 8-11 with several highlights including an opening reception at the King Ranch, chuckwagon dinner and WSGA Invitational Rodeo and a ranchers’ roundup banquet and celebration, in addition to general sessions and meetings.

In addition, WSGA Endowment Campaign Co-Chair Jim Wilson shared with attendees WSGA succeeded their goal of raising $1.5 million for the WSGA Endowment Trust Fund. The convention activities ended on June 11 with a WSGA parade, the Governor’s Proclamation signing and a tour of the Wyoming State Capitol.

“It’s an honor to be here and what an amazing occasion – 150 years is a remarkable anniversary any way you look at it,” said Gordon.

Gordon acknowledged WSGA as a great organization, with wonderful people serving as its members.

“When I think about all of the remarkable achievements, I’m very proud to stand in a long, long line of WSGA presidents who have served as governor and this is something this association can take enormous pride in,” Gordon said. “It speaks to the fact both Wyoming and the WSGA have grown together.”

Gordon noted, agriculture is Wyoming’s backbone. When he was younger, he recalled saying, “I want to be a cowboy.”

His dad would respond, “Well, I think you would really be better to be a cowman.”

Gordon continued to say, “It’s important to keep the tradition of vision and growth growing – to keep this resilience and backbone making Wyoming what it is.”

During his address, he gave comments on several issues impacting the state and expressed his commitment to avoid incursion from the federal government.

“Wyoming people take care of their own, we are family – we may not always agree, but we can get together and we can talk,” he shared. “One hundred and fifty years is no small feat at all – it shows resilience and dedication, shows of our past and talks a lot of what our future holds.”

“The Clifford P. Hansen Memorial Scholarship serves as a reminder of the dedicated leadership provided to WSGA and the state of Wyoming by past and current leaders of our history,” stated WSGA Executive Vice President Jim Magagna on the WSGA webpage.

Applicants were required to submit an official transcript and essay of 500 words or less addressing the following questions: What have you gained from your college experience? What leadership roles have you acquired since starting college and how have those leadership roles influenced you? How do your post-college plans involve agriculture or natural resources? and What characteristics distinguish you as deserving this scholarship?

The 2022 award recipients are Abigail Vogl and Kagan Sims. The scholarship is made possible from donations made to the Wyoming Endowment Trust Fund in memory of Sen. Hansen and past WSGA presidents.

The WSGA Outstanding Range Professional Award is given in recognition of valuable contributions to the livestock industry made by range professionals who exemplify high professional standards, coupled with a dedication to building strong working relationships with livestock producers.

“I’ve got to know Derek personally through some collaborative work we have done through the university. I refer to him more as a bulldog – when he starts a project, he sees it to the end,” said WSGA President David Kane. “He is very science-driven and very practicable, fair and honest. We are very fortunate to have someone like Derek in the state – he is all about helping the ranchers, and he does what is best for the land.”

Guardian of the
Grasslands Award

WSGA also presented the Guardian of the Grasslands Award. This honor is given to an individual who has put in time and effort into preserving Wyoming’s agriculture industry. This year’s award was given to Albert Sommers.

“Albert is a remarkable person – he has done so much with his own ranch and for ranching in Sublette County and certainly as a Wyoming legislator,” said Magagna.

Albert was nominated by his sister, Jonita. A part of his nomination reads, “Not only does Albert actively participate and advocate for Wyoming agriculture, he is extremely passionate about promoting ranching and conservation in the arid West. His demeanor and respect for others aid in compelling the Wyoming ranching story. He has a unique ability to connect with people from various backgrounds to get his point across professionally and accurately.”

It continued to say, “Albert’s respect and tie to the past years of ranching in our community fuels his drive to protecting the legacy of agriculture in Wyoming. He is deeply moved by the homesteaders in our county who made their way for the ranchers of today.”

During the event, the WBC recognized two outgoing board members. WBC was established in 1971 to serve as the promotion, research and education arm of the Wyoming beef industry. The board is comprised of five members, who are appointed by Wyoming’s governor. They represent all segments of beef production within Wyoming including cattle, dairy cattle and feedlots.

“These two members have been very capable, grounded and really helpful over the last six years,” said WBC Executive Director Ann Wittmann. “Those two members are Timmery Hellyer, who served as a feeder representative, and Leslie Hendry, producer of range cattle.”

“Their terms ended the end of June and I’m really sad to see them go,” she added.

During the luncheon, WSGA awarded the Environmental Stewardship Award. This year’s winner is the Johnson Ranch from Carbon County.

“All of us, as ranchers, know we are stewards of the land – it’s inherently why we are there, to nurture the land,” said WSGA Promotion, Education and Enhancement Committee Past Chair Melinda Sims. “This program really highlights and recognizes those producers who go above and beyond to make sure the land they operate on is better than when they found it, environmentally sound, beneficial to livestock and wildlife and there for future generations.”

“The Johnson Ranch was proudly established in the late 1800s and has a long history of public service and conservation,” she mentioned. “They are currently under the management of John and Reese Johnson, who are fifth-generation ranchers.”

The Johnsons operate a cow/calf operation and continually work to improve riparian areas, grass resources and wildlife habitat on the ranch, she explained.

“Their dedication to improving the quality of their land, conserving natural resources and serving the public have not gone unnoticed,” she continued. “The Johnson Ranch and WSGA invite all of you to learn more and celebrate this prestigious award with them on the Environmental Stewardship Day, June 28, in Elk Mountain.”

The WSGA Endowment Trust had a goal to raise $1.5 million in endowment funds by the 150th Anniversary Celebration and Convention. WSGA Endowment Campaign Co-Chair Jim Wilson announced the organization not only met this goal, but succeeded this goal by raising $1,522,000.

“We’re going to be at $2 million before we know it,” said Wilson. “If we want to support young agriculture, it takes money and the funds from this endowment will be available to support various purposes in stock growers.”

Wilson thanked those who contributed to the endowment fund and gave special thanks to Founder, Former CEO and Former Chairman of TD Ameritrade John Joseph Ricketts, who stepped up and helped WSGA meet their goal.

“We were extremely pleased with how well it went. We had strong attendance, which is always a good sign, and people seemed to enjoy themselves and were very engaged,” shared Magagna. “All our speakers were outstanding. Overall, it was a really good celebration of 150 years and represented encouragement for the future of the ranching industry in Wyoming.”

In addition to the convention activities on June 10, Gov. Gordon signed a proclamation on June 11, recognizing the year 2022 as the 150th anniversary of the WSGA.

“It’s always nice when the governor will sign a proclamation, but the unique thing about this one is it’s recognizing not just an occasion, but the work of an organization over 150 years,” said Magagna. “We are very appreciative of his willingness to sign it and all the participation he had in our convention.”

After the proclamation signing, Gordon personally led a tour of the Capitol for those who were interested.

Magagna shared another noteworthy event during the convention was when Sen. John Barrasso (R-WY) put a major piece in the Congressional Record congratulating WSGA. Several copies were made available to WSGA for their record and memorabilia.

“The nice thing about Wyoming is this governor, and many of our previous governors and elected officials, are one of us,” explained Magagna. “They are in the ranching industry, understand our industry and are committed to it.”