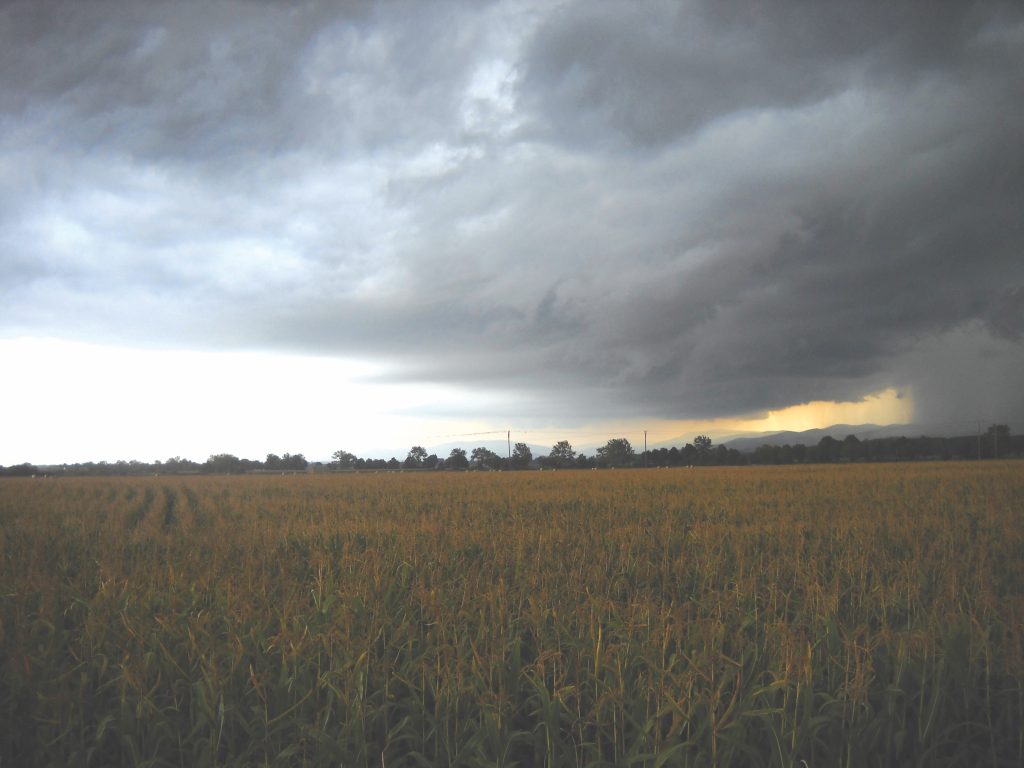 Lusk – On May 11, Meteorologist and DayWeather, Inc. President Don Day, Jr. presented during the 2022 Wyoming Agriculture Bankers Conference at the Niobrara County Fairgrounds. During his presentation, Day discussed La Niña predictions and a future summer forecast for the state of Wyoming and surrounding states.

During a La Niña pattern, the subtropical Pacific Ocean is cold, Day said.

“Very little energy is stored in the atmosphere where we have our weather,” he said. “Most of the energy driving the weather is in the oceans.”

Colder temperatures in the ocean near the equator is one reason the Western states continue to see drought conditions, he noted.

“La Niña is a drought indicator for the West, especially for the Rockies, Plains and down into Texas, New Mexico, California and the Pacific Northwest,” he added. “Anytime we hear a La Niña is coming, it’s bad news because there is more wind, drought and extreme weather events.”

It’s important to note each La Niña and El Niño is different and cycles repeat, but they are not the same all of the time, he shared.

When these La Niña cycles take place, strong jet stream winds come through and drought cycles are hard to break – it takes a while to get into a drought, and it takes even longer to get out of the drought, he mentioned.

Throughout the Midwest there have been several areas seeing above 30-year precipitation averages. Recent snowstorms in the Dakotas helped raise the precipitation levels, he mentioned.

“South central, south western and western Wyoming and down into Colorado have not benefited,” he shared. “In the last 60 days, things have been better, not great, but better for Wyoming.”

Severe drought continues for portions of the state and U.S. Day predicts these conditions will continue throughout the summer, with little rain chances along and south of Interstates 70 and 40.

There have been several improvements near the northern part of the state and Day predicts these conditions will continue. Wyoming’s current drought monitor suggests Wyoming is experiencing anywhere between abnormally dry to extreme drought, but there have been some improvements in North Dakota, South Dakota and some parts of northern and central Wyoming.

“These are good signals I predict will push into summer,” said Day.

He noted it also has been cool since the first day of January. For the West, April was wet and cool, which did two things – it put down a lot of snow in the mountains and it reduced meltdown, increasing the snowpack.

For the majority of the U.S., the colder, wet weather has greatly impacted planting. According to Day, as of May 8, only 22 percent of corn was planted in the U.S., with significant problems in the Dakotas – they have gone from drought to cold and wet.

“Even though there is a warm up in the Midwest right now, with record temperatures in Iowa, Missouri and Illinois, in the coming weeks, it’s predicted to be more cold and wet,” he shared. “I predict planting in the Corn Belt will be behind schedule this year, more so than the past several years because of wet soils and it being cool.”

North Dakota currently is the farthest behind schedule, with only four percent of acres planted, compared to the 59 percent last year.

Snow will continue to fall in the mountains during this time of year, and Day predicts two to three more snow events.

“The water situation has really improved, it’s not great, but April was a really good month for the high country,” he said.

According to Wyoming Natural Resources Conservation Service Hydrologist James Fahey, the Wind River Basin is going to end up being at 98 percent of the streamflow into the reservoirs, noted Day.

When comparing the current snowfall, snow water equivalent (SWE) and inflow to two months ago, the forecast was not nearly as good. Several SWEs across the state are well into the 100 percent range, which is good news, he added.

Cold Pacific cycles, also known as negative Pacific decadal oscillations typically rotate every 15 to 30 years, he shared. This current cycle started in 1999/2000, which means the U.S. is 22 to 23 years into the cycle.

“The bad news is we’re going to be in this colder Pacific cycle for a few more years,” Day explained.

This summer, Day predicts the sun will warm the water near the equator, causing the La Niña to slightly weaken, but the states will experience another summer of La Niña, with the Plains being most affected. He noted Wyoming will be right on the edge of two areas – a wetter area to the north and a drier area near the Wyoming and Colorado border.

Day predicts this time next year, Western states will not yet be in an El Niño, but the La Niña will be slowly going away.

“We’re going to have some good spots and some bad spots going into this next growing season,” he said. “But the outlook is the La Niña is going to dissipate really slowly and then we are going to start a new cycle.”

Day predicts there will not be an El Niño in 2023, but there won’t be a La Niña either. There should be better precipitation throughout the West from 2023 to 2026.

He also suggested after getting through a cooler, wet planting season, he doesn’t see a further drought signal in the Corn Belt. California, Colorado, Arizona, New Mexico, Texas, parts of Kansas and Oklahoma will be areas of concern for drier conditions.

Wyoming is in between these two areas, and he forecasts the next few weeks to be more cool and wet, but as summer continues, Interstate 80 to the south will be areas of concern.

“We’re turning the corner on this drought – that’s the good news, but we have to get through this summer,” he mentioned.