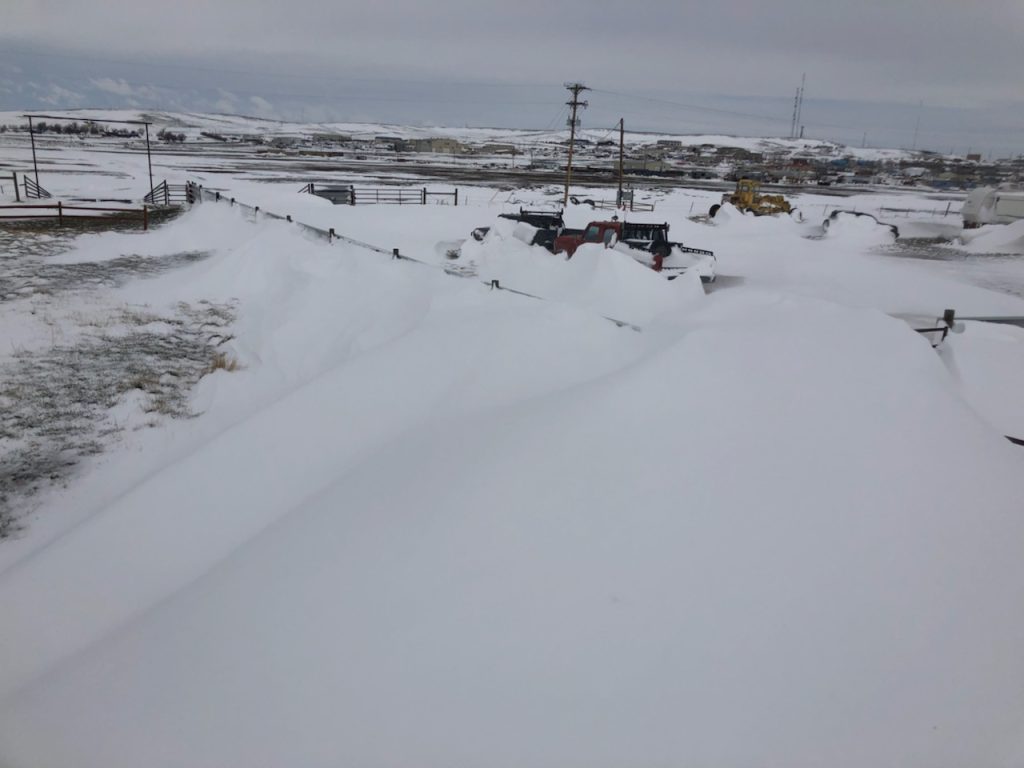 “The storm is on track with no major deviations in the models,” Day had said prior to the blizzard. “Everything but the kitchen sink is coming our way.”

Day encouraged livestock producers to begin to prepare. The chance for inclement weather was predicted to be especially high in central and northern Wyoming, western South Dakota, North Dakota and southern and eastern Montana.

“It would take an act of God for this storm to turn around and change,” Day joked. “This next storm is going to deposit a ton of snow in the mountain regions of Montana, Wyoming and Colorado.”

“We got about six to 10 inches of snow, which is all in drifts and made choring difficult,” says Geis.

“We did chores with tractors because of the visibility and drifts,” she explains. “For the most part our livestock did pretty well – we were fortunate to have everything pretty close. The cow/calf pairs were bedded down pretty good and we had a shed for our sheared sheep.”

The ranch is not yet lambing, but they did lose a few calves as a result of the weekend storm. Geis recalls the last memorable snowstorm was in 1984 when her daughter was one-month-old.

“The drifts look a lot the same to the ’84 blizzard, but it lasted a day or two longer,” she shares.

“We weren’t quite as bad as people further east and south of us, but it was bad enough,” adds Kretschman Angus owner Kelby Kretschman. “It was a bit rough for one of our calving herds.”

Located north of Arvada, the terrain in his country helped his herd get out of the wind.

“We couldn’t see a lot of the outside cows,” he shares. “We fed a lot prior to the storm and luckily the storm only lasted about a day and a half.”

“We talked a lot about blizzard conditions, especially in northeast Wyoming,” says Day. “Some spots in northern Wyoming and southern Montana were warm enough to experience some rain and wet snow, places like Billings, Mont., Buffalo and Sheridan; but closer to the center of the storm, where it was a bit colder, there was significant snowfall.”

“Drifts will be around for a while, but there is a lot of water in the snow which will pay dividends down the road,” he adds. “For many portions of the state, snowpack equivalents are getting well above 100 percent of median after this most recent storm. We do need more, and I think more is coming.”

In the long-term, Day predicts more wet and stormy weather patterns for the northern part of the state and less moisture for southern Wyoming.

“It’s really a case of the have and have nots,” he says. “There has really been some great moisture, depending on location.”

“If you look at the last 30 days, there are heavier areas of moisture to the north [Montana, South and North Dakota, Washington, Oregon and parts of Idaho],” he says. “What really sticks out are these down sloping wind events bringing high winds and drier conditions across the Plains and Western region, with heavier moisture storms tracking more to the north.”

“This has been the trend all spring and I think for the rest of April, but I do foresee some better opportunities in May,” he says. “We could have opportunities for wet weather and thunderstorms in the coming weeks.”

Brittany Gunn is the editor of the Wyoming Livestock Roundup. Comments on this article can be sent to roundup@wylr.net.