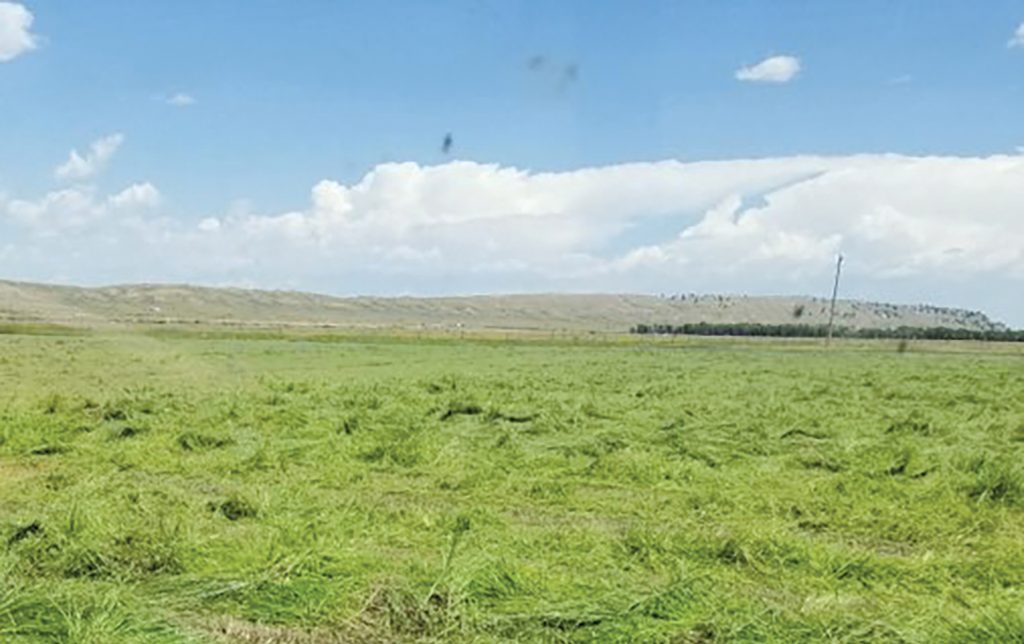 Elk Mountain – Proudly established in the late 1800s, the Johnson Ranch has a long history of public service and conservation. The ranch, located in Carbon County, is currently under the management of John and Reese Johnson – the fifth generation on the ranch.

John and Reese have two children on the ranch full time; their son Shae, his wife Carla and their three kids Kaylee, Kayson and Kanyon; and their youngest daughter Shannon and her boys Isaiah and Micah. During the summer, the ranch becomes a family affair when the rest of the crew – John and Reese’s eldest daughter Cynthia and middle daughter Katie bring their families to help.

The Johnsons operate a cow/calf operation and continually work to improve riparian areas, grass resources and wildlife habitat on the ranch. Along the way, Johnson family members serve their communities. Their dedication to improving the quality of their land, conserving natural resources and serving the public have not gone unnoticed. In fact, the Wyoming Stock Growers Association (WSGA) has recognized the Johnson Ranch as the 2022 Environmental Stewardship Award Winner.

According to the Medicine Bow Conservation District, one of many nominators in support of the Johnson family’s recognition with this award, the three most impactful innovative stewardship practices which take place on the Johnson Ranch include adjusting calving season, increasing energy management and planning for wildlife and the future.

The Johnson Ranch has run a predominately Red Angus cowherd since choosing the breed around 1984. In total, the herd nears 700 head including cows, bulls and retained yearlings. Nearly 10 years ago, the Johnsons began the process of transitioning their operation to retain calves and sell them as yearlings.

This practice has allowed the ranch to sell locally finished beef by whole or half portions, as well as keep cash flowing year-round.

The Medicine Bow Conservation District noted that over the years, the Johnson Ranch has adjusted their calving season to better fit their grass resources and match their management goals.

Pushing calving back to May and June proved challenging for the Johnson Ranch in terms of summer grass nutrition and breed back during warmer periods of the summer. Calving in April and May, closer to the onset of green grass, ensures calves and mother cows have access to high-quality forage and are not heat stressed when it comes time to rebreed.

The many riparian areas included in the Johnson Ranch provide a unique opportunity to be flexible in their management practices. According to the Medicine Bow Conservation District, the heart of the Johnson Ranch lies in over 18 lineal miles of the Medicine Bow River, along with several miles of Wagon Hound Creek, Mill Creek and the Hadsell Slough.

Natural Resources Conservation Service Ecological Site Specialist Marji Patz, another nominator, shared, “Mr. Johnson’s operation is more than just a ranch or a livestock operation. His operation is built to preserve an amazing riparian corridor that is key to a diverse population of wildlife.”

The water rights associated with these streams are mostly Territorial or “First” water rights, and the Johnson family has enrolled the use of a conservation easement to protect the ranch’s resources – land and water – into perpetuity.

“The Johnsons work to keep water quality as high as possible, not only for livestock, but wildlife, fish and other aquatic species as well,” nominators mentioned.

According to a nomination document, the Johnson family works to complete as many tasks around the ranch as possible with the least amount of fossil fuels. For example, the Johnsons stockpile winter feed in standing piles or windrows, as well as reduce the number of hay feeding days.

“They have slowly reduced the feeding days required from a historic average of 150 days – sometimes upwards of 180 days – down to less than 90 days per winter, even through severe winter storms,” according to the Medicine Bow Conservation District. “Doing so reduces the amount of hay processed from 3,000 tons to around 2,000 tons.”

With a capacity to produce around 3,000 tons of hay each year, this practice not only saves the ranch money in terms of fuel, but also provides the opportunity to sell between 500 and 750 tons of hay.

Nominators shared the Johnson family treats wildlife as a part of their operation. In fact, the Johnson Ranch has set aside parcels of their land to not be included in their grazing plan.

Patz noted, “The operation is developed to manage the herd health of the deer, elk and antelope populations that utilize this corridor. Mr. Johnson is aware of and works to preserve the upland game bird and other bird populations as well as the predatory populations.”

“He is concerned for the soil health of his hayfields and rangelands, strives to reduce the risk and impacts of invasive species and takes a proactive, integrated approach to managing all resources,” she added.

The conservation easement is another way the Johnson family has planned to continue protecting the ranch’s greatest resources, including wildlife.

The Johnson family has a long history of public service in many different capacities. John is the third family member to have served on the Medicine Bow Conservation District Board, where he participated for over 15 years until he began serving as a Carbon County Commissioner. John has also worked on such committees as the Wyoming Public Lands Initiative and was integral in developing the Medicine Bow Conservation District’s Long Range Natural Resource Plan.

Patz shared, “John’s dedication to natural resources extends beyond his own operation. He is concerned for the ranching and rural communities widely and he strives to understand the legislation that is in place, proposed changes being presented and chooses to be proactive in the process.”

Reese Johnson served on the Carbon County School Board. The family also has deep ties to service with the rural electric co-op board, which Bob Johnson previously served on for 40 years and Shae Johnson now currently serves.

“John and his family have been a strong part of the local communities and county,” said Nominator Todd Heward. “They have raised their families on the ranch and have been proud to call it their home.”

“Whether it is optimizing hay production, maintaining a viable fishery on the Medicine Bow River, protecting sage grouse or selecting progressive genetics in the cattle herd, the Johnsons have worked hard to be successful,” Heward shared.