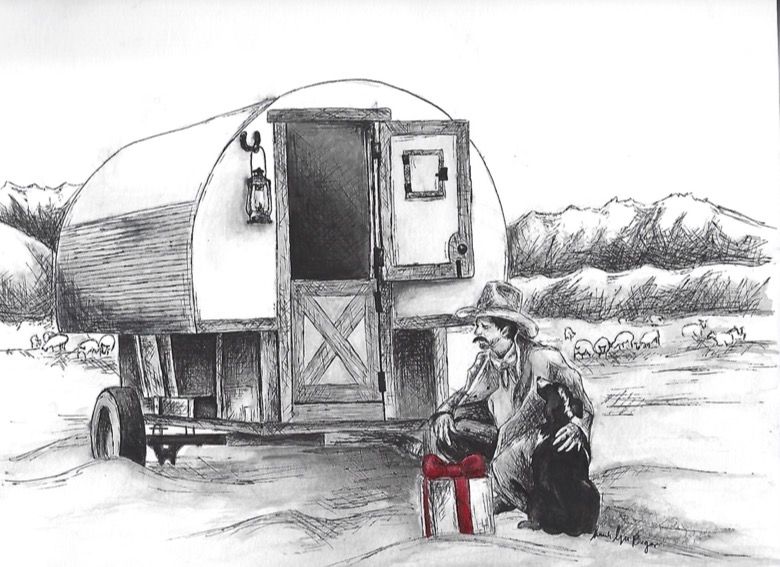 Nicholas unsaddled his horse and tossed the mare a flake of hay. He grabbed a few sticks of wood and a chunk of coal to add to the fire already burning in the stove. He knew a cozy camp was important for a sheepherder on Wyoming’s Red Desert.

“Here Laddie!” and “Come Sadie,” he called to his Border Collie sheep dogs as he poured extra dog food into their bowls. He had already carried dog food tied in a spare oat bag out to the livestock guardian dogs. These big, white fluffy dogs were on patrol around the sheep as the herd bedded on top of a nearby hill. They would sleep through the long winter’s night, snug in their warm wool fleeces.

Nicholas looked at the calendar pinned to the wall inside his sheep wagon.

“It’s Christmas Eve,” he told Laddie and Sadie. “It sure is a white Christmas!”

He watched the sunset glowing pink and red, lighting up the drifted snow. The near constant winds had blown some of the sage-covered land bare, leaving grasses grown the previous summer exposed and waving yellow stems. The sheep grazed on this dried grass during the winter months. They also ate sweet kernels of golden corn, fed to them daily by Nicholas and Pepe, the camptender, who delivered it by pickup truck every morning.

For now, though, Nicholas was content. He had kept his sheep safe and fed for another day. He settled onto the step in front of his wagon and sipped a cup of strong coffee. The scent wafted into his nostrils, adding to the clean smell of sagebrush and the lingering smoky smell from his wood-burning stove.

Suddenly, Nicholas heard a thumping sound and Laddie and Sadie started barking. The guardian dogs appeared one by one out of the flock of sheep, looking in the direction of the noise.

“What is it?” Nicholas asked the dogs.

He walked to the back of the supply wagon, attached to his camp. It was there he stored his extra horse hay, oats, water barrel and dog food. Nicholas saw a dark shape in the diminishing light, and an odd red glow.

Who could be here, 50 miles from the nearest town?

Nicholas stepped closer, then shook his head. He must be seeing things! The shape gradually took on the form of a reindeer, which Nicholas had only seen in books. Reindeer! Christmas Eve!

“I know you are surprised,” came a soft voice, “but I really am Rudolph the Red-Nosed Reindeer. Santa sent me.”

Nicholas shook his head. He turned his flashlight on the reindeer, which indeed had a glowing red nose. He sure looked real! Nicholas reached out his hand, and patted the soft hair of Rudolph’s neck.

“I don’t usually talk to people, but this is an emergency!” Rudolph gave his head a shake, making his belled collar jingle. “It’s Christmas Eve, and the reindeer are all down with the North Pole flu. Santa isn’t feeling too well, and Mrs. Santa is taking care of everyone!”

“Say, do you mind if I have a bite of that hay? It was a long flight down here!”

Nicholas couldn’t believe he was taking to a magical reindeer, but Rudolph went on.

“Luckily, the elves are fine, and they’ve got the sleigh loaded, but we don’t have enough flying reindeer to pull it. Santa sent me to find substitutes to pull his sleigh, and a driver who knows how to handle a team.”

“He thought of you. You’ve always been on the good guy list, and you know how to drive a team of horses. Now, if we can only find critters to pull the sleigh!”

Nicholas thought a moment. “I don’t know if they can fly, but lots of pronghorn antelope live here on the Red Desert.”

“Great idea,” said Rudolph. I can supply them with the magic to fly, if we can find eight willing antelope.”

With that, Rudolph’s nose began to glow brighter and brighter. Soon, it was sending out great strobes of red light. Nicholas thought it could probably be seen for miles.

After a while, they could hear trotting noises, and antelope began to appear around camp. Nicholas put the Border Collies into his sheep camp so they wouldn’t bark and scare away the gathering pronghorns.

“Are any of you afraid of flying?” he asked. “Because Santa Claus needs some flying critters to pull the Christmas sleigh.”

The pronghorns looked at each other. None of them had ever flown, or even thought about it. Of course, they knew about birds flying. The Red Desert was home to eagles, ravens and hawks who soared high above looking for rabbits to eat. They even knew about sage grouse, who flew lower to the ground.

The pronghorns had also never spoken. They communicate through distinctive cries and signals. Now though, a large doe stepped forward and found herself talking.

“I’m Esther, short for Esther Hobart Morris, I think I could fly if I had a lesson.”

Soon the other antelope were mummering among themselves. Some allowed as how flying was way too scary, while others wondered what the world would look like from so high in the sky. One by one, bucks and does began stepping forward.

“I need four strong bucks to be harnessed just in front of the sleigh, and four quick does in the lead.”

Nicholas pinched himself to make sure it wasn’t all a dream.

In a matter of minutes, eight pronghorns had volunteered. Esther was one, as she was joined by Nellie Tayloe Ross, Louisa Gardner Swain and Sacajawea.

“Oh, we have antelope names too, but you couldn’t pronounce them,” said Esther.

“In the winter, we have lots of time and we study Wyoming history,” Chief Washakie told the amazed Nicholas.

Rudolph concentrated and soon his nose sent a glow over all the chosen pronghorns.

“I’m sending out magic that will make it possible for you to fly,” he explained to the wondering antelope.

Nicholas jumped back to avoid the flying spell. He didn’t see the guard dog standing attentively behind the group.

“It only works at Christmastime,” Rudolph told them.

“Wait here,” he said to Nicholas. “We’ll be back in a magical minute.”

Nicholas stood on the desert in wonder, listening to the night sounds, which did not include talking reindeer or flying pronghorns. The full moon was starting to rise over the Ferris Mountains to the east. Had he imagined it all?

Just then, he saw a wondrous sight. It was a red glowing light, which soon became Rudolph and the eight antelope, harnessed to a flying sleigh. The sleigh was laden with presents – toy pickup trucks and trailers, camo coats in pink and green, Wyoming Cowboy caps and many, many wondrous gifts.

The sleigh landed lightly near the sheep camp, setting off a fresh round of barking from inside the camp.

“Hop in, Nicholas,” Rudolph told Nicholas. “It is up to you to guide us to the homes of all the good boys and girls.”

“Wait!” said Nicholas. “How will I know where to go? How will we make it to houses all over the world?”

He thought a moment. “I can’t leave the sheep for that long!”

“Don’t worry,” Rudolph reassured him. “With Christmas magic, we will go everywhere we need to and be back before dawn. The guard dogs will watch out for the sheep for this one night.”

Nicholas decided that he had to believe in Christmas magic and do his part to make sure that all the world’s good boys and girls would get their holiday gifts. He stuck some coal in his pocket, just in case. He pulled his Scotch cap down over his ears, climbed into the sleigh and took up the reins.

“On Esther, on Nellie, on Bill and Louisa,

On Jims, on Chief Washakie, on Sacajawea,

And behind them flew one guardian dog, keeping an eye on them all.

This Christmas story was written by Sharon O’Toole of Savery.