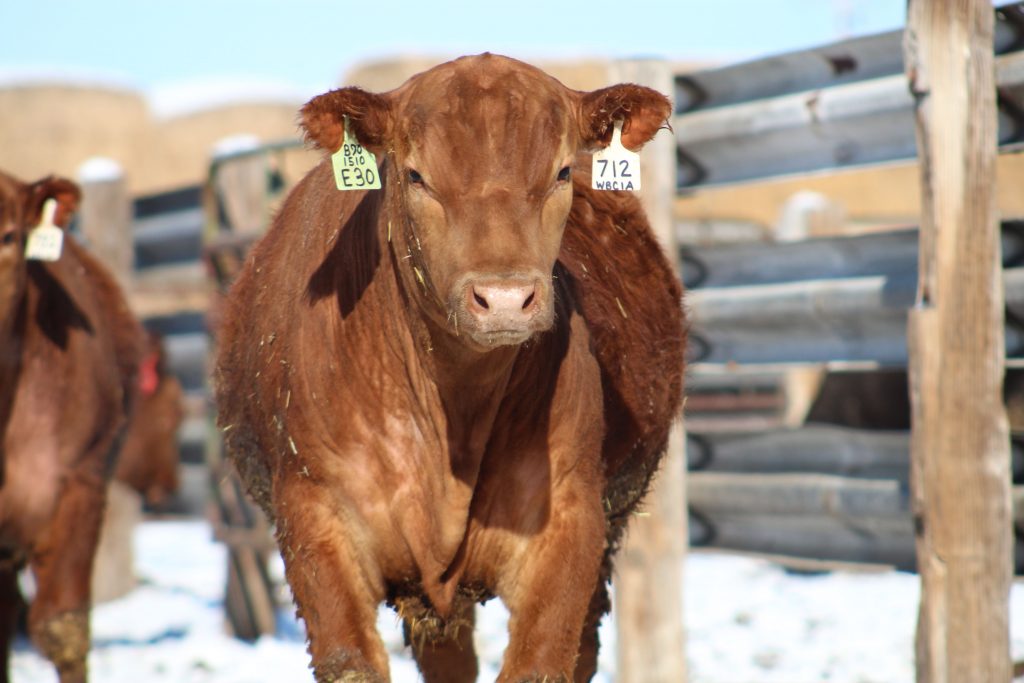 This year marks the 36th anniversary of the Wyoming Beef Cattle Improvement Association (WBCIA) Bull Test and Sale. Rising production costs have made selecting bulls with tested and proven superior genetics a priority for many ranchers.

Results from the mid-term weigh date are in, and the final weigh takes place during the last week of February.

The 65-day progress report, released in early January, shares bull health and performance has been outstanding, even through extreme weather.

Registered Angus bulls from five consignors had an average daily gain (ADG) of 2.99 pounds per day. The top gaining bull in this division is Klein Cartwright 011, consigned by Bill and Jill Klein of Klein Angus from Wheatland, with a 65-day weight of 1,215 pounds and an ADG of 4.02 pounds per day.

Consignors of Red Angus bulls brought a group of 32 high-performing bulls with an average 65-day weight of 951 pounds and group ADG of 3.5 pounds per day.

Pingetzer’s Six Iron Ranch consigned the second and third highest gaining bulls, Six New Direction H18 and Six Dawson H23. The 65-day weights of the bulls were 1,080 pounds and 1,155 pounds and ADG was 4.28 and 4.26 pounds per day, respectively.

“The WBCIA Top of the Mountain 36th Annual Bull Test Sale will offer between 85 and 90 quality bulls after the final cuts are made based on performance and semen tests,” said Program Organizer Bob Pingetzer.

“There will be some really good Black Angus bulls offered to work for both heifers and cows,” said Pingetzer. “There will also be some solid Red Angus bulls.”

Bulls will be available for viewing the day of the sale, but will sell on video. Pingetzer explained buyers not able to make the sale in person will have multiple call lines available to bid.

Sale videos will be available online at billpelton.com/cattlesale/wyoming-bull-test-wbcia.

A handful of the consignors from this year’s WBCIA sale are advertising their offerings in the sale. Look in this week’s edition of the Roundup to find offerings from Oedekoven Angus, Pingetzer’s Six Iron Ranch, Steve Smith Angus, Buline Angus and Klein Angus. Look for full results from the WBCIA’s Top of the Mountain Genetics 36th Annual Bull Test Sale in an upcoming Roundup.