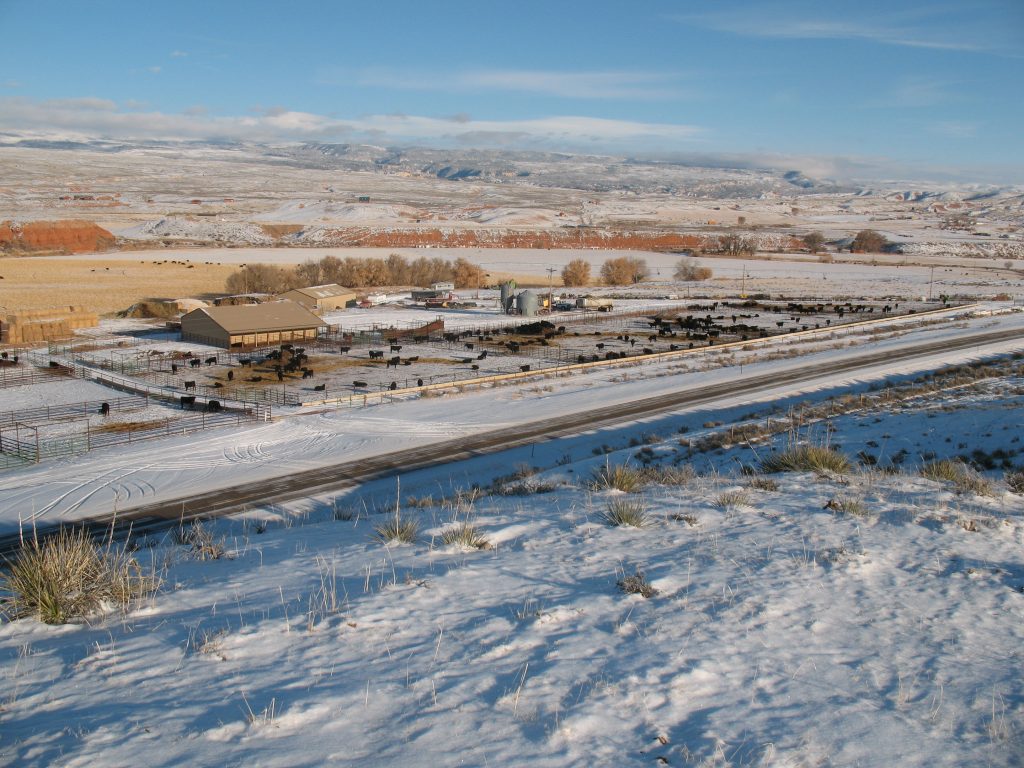 After moving to Wyoming to raise their three boys, Keith and Laura Galloway purchased a ranch in Ten Sleep with the hopes of running an operation where conservation and agriculture could meet.

In 1998, the family established the Galloway Ranch, where they have continued to improve their operation and instill their love for animals and the land in their children.

For 22 years, the Galloway family has practiced stewardship and conservation, and their efforts have not gone unnoticed. In fact, the Wyoming Stock Growers Association has recognized the operation as the 2021 Environmental Stewardship Award winners.

According to the Washakie County Conservation District, one of many nominators, the Galloways started out with 200 mother cows. They have since made many improvements and additions to the property, and they currently run 550 Black Angus mother cows while maintaining ownership of their heifers.

Additionally, the Galloways have a background feedlot where they keep their weaned calves until they are sold or turned out in the spring. They also raise their own hay and corn silage while utilizing sugar, beet pulp and barley straw to supplement their cattle while they are calving on the home place.

Upon its establishment, the Galloway Ranch has placed an emphasis on sustainability and being stewards of their land and livestock.

To accomplish this goal, the family has worked with many partners including the Washakie County Conservation District, Natural Resource Conservation Service (NRCS), BLM and the USFS.

According to Washakie County Conservation District, one of the first efforts the Galloway family took on was to improve their water supply.

They developed nine natural springs on their USFS allotment, which allowed pipe to carry water to storage and drinking tanks placed in strategic places. The springs were then fenced to keep them protected.

The family also drilled four wells – three on deeded land and one on a state section – for additional water resources.

They also utilized solar energy on three of these water sources to pump water to tanks, and they have spent numerous hours cleaning sediment out of their reservoirs to increase storage capacity.

Additionally, in conjunction with Washakie County Conservation District and NRCS, the Galloways addressed the water quality issue at their home place by relocating their corrals to a higher location and out of a floodplain.

This project reduced the risk of contaminants running into the Nowood River.

“By developing their water, many other stewardship practices could be implemented,” states Washakie County Conservation District.

After improving their water, the family then worked on their forage. To do this, they installed a center pivot irrigation system to ensure water is evenly distributed and to reduce tailwater runoff into the Nowood River.

Through rotational grazing, the ranch also improved their rangelands, which included four pastures in a BLM/deeded allotment, three state leases, two pastures on a mountain deeded section and nine pastures on a forest allotment.

The Galloway’s cattle are rotated through these pastures from April 20 to Nov. 1, and forage production has increased since they installed cross fences and improved the water, according to the Washakie County Conservation District.

A friend of wildlife

In addition to caring for their land and livestock, the Galloway family is also a friend of the wildlife in their area. In fact, the family has made many improvements to make their operation more wildlife friendly.

These include fencing off the river to allow banks to heal, therefore creating a better habitat for aquatic animals and a shelterbelt for birds and other wildlife as well as retrofitting their fences to be more wildlife friendly, installing fence markers within 0.6 miles of sage grouse leks and ensuring all of their water tanks have bird escape ladders.

Additionally, the Galloways removed all of the invasive Russian olive trees along a stretch of river on their land and replaced them with rows of golden willows and shrubs including nanking cherry, buffalo berry and cotoneaster, which produce berries and provide food and habitat for birds.

In cooperation with BLM, the Galloway family has also implemented a sagebrush mowing project on a southern section of their deeded land and BLM allotment, which lies within core sage grouse habitat, to create a mosaic pattern for sage grouse habitat and to increase forage components.

“In order for this project to be effective, Galloway Ranch deferred from grazing these pastures until after seedripe to encourage seedling production and establishment,” explains nominator Michael Philips, field manager for the Wind River and Bighorn Basin BLM District.

According to the Washakie Conservation District, the Galloways have always been willing to share what they are doing with others and advocate for agriculture in their local community and beyond.

The family has given several tours of their operation to show off their stewardship practices, and they have also been actively involved in supporting local 4-H and FFA members.

“The Galloways are valued members of the local community, supporting 4-H and FFA programs and participants by offering the use of their facilities and scales for livestock projects and offering their livestock for the judging teams’ training and practice. They have hosted student tours on rangeland management, rangeland grass identification and rangeland judging. They have even supported junior livestock sales by sponsoring trophy buckles and purchasing exhibitors’ livestock,” said nominator Lyle Spence. “The Galloways are good people, a great asset to our community and are very deserving of this award.”

Spence continues, “The family came to a new region a little over 20 years ago, quickly assimilated into a type of ranching new to them, and they excelled. They took a classic old-time cowboy outfit and transformed it into a model of modern environmental stewardship.”