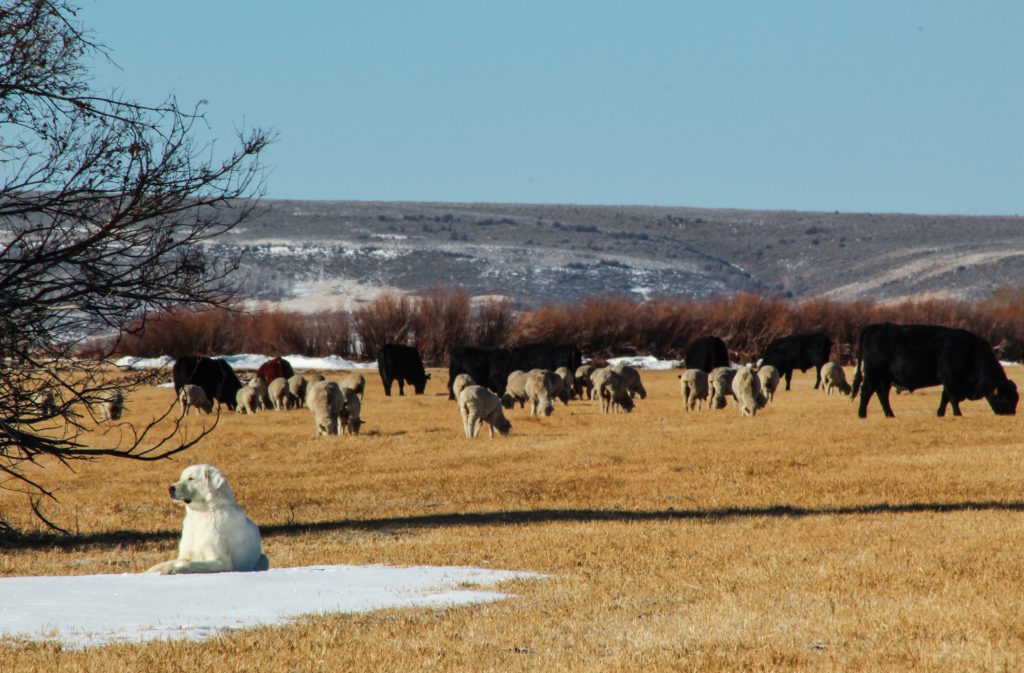 Western Wyoming Rancher Cat Urbigkit shared the continuous cycle of ranching with wolves and other large predators at the Wyoming Women’s Ag Symposium Nov. 13 in Casper. Urbigkit utilizes livestock guardian dogs to protect her family’s cattle and sheep herds, and has traveled throughout Europe, Asia and Africa to learn about guardian dog use with livestock in different cultures.

Urbigkit’s family ranch is located three miles from the Bridger Wilderness, just outside of the Trophy Game Area. Since the wolf reintroduction to Yellowstone National Park, wolves have expanded their range and territories. She says in the last 10 years, wolves have been showing up on their place, but it wasn’t until five or six years ago they began to take up residence on their ranch and grazing allotments, causing problems with livestock.

“In 2016, I got a call from the Wyoming Game and Fish Department stating the game warden had seen a pack of six wolves on the property,” says Urbigkit. “I decided to forego grazing in the area for the year, thinking I saved my sheep. But, I actually allowed the pack to gain a larger foothold in the area and opened the door for a really bad scenario the next year.”

For years, Urbigkit has been passionately fighting large carnivore predation on her sheep and cattle herds and sharing her story along the way.

“After moving my sheep and guard dogs into the area the next year, we had running battles between the guard dogs and wolves,” she shares. “This happened almost every night for months, losing sheep along the way.”

When it comes to deterring wolves, she utilizes a range of non-lethal options, including livestock guardian dogs to protect the herd. Depending on the season and location, Urbigkit uses 15 non-lethal techniques including fencing, night penning, culling weak animals, noise makers, frequent human activity, multi-species grazing and changing bedding sites frequently.

“But, the reality is, all non-lethal methods will fail at some point,” Urbigkit states. “These deterrents help to delay the inevitable.”

Urbigkit also aggressively tracks predators and their activity using game cameras, GPS collars and intense calendars to mitigate damage to both her herds and her livestock guardian dogs.

“Feeding and managing eight to 11 dogs for one flock is a big deal,” says Urbigkit.

She explains they are very independently thinking animals, each with different reactions to situations.

“Livestock guardian dogs have different responses to their interactions with wolves,” Urbigkit notes. “Some don’t want to be guard dogs anymore after wolf encounters. Others get a chip on their shoulder and want to go at the wolves again.”

Wolves are a very highly competitive species, she says, and will work to eliminate other canines in their territory. She adds she has found many areas where both wolves and her dogs were using the same scent stations to mark where their territories would overlap.

During her presentation, she shared photos of livestock guardian dogs before and after seasons of heavy wolf activity and after interactions with wolves.

“We do a lot of different things to keep the sheep out of harms way,” says Urbigkit. “We stay in open country as much as we can, avoid pinch points and areas we expect wolves to utilize.”

Often, she says, they do not effectively utilize their grazing range and resources because of wolves.

“We are not managing for optimum range condition, but for keeping livestock alive in the presence of wolves,” she notes. “Which means we are actually managing for wolves and not for livestock.”

She explains during one night in September of 2017, she lost 16 head of sheep. Not all of those killed were eaten, and three of her guardian dogs were injured.

“Our market lambs from that year weighed 10 pounds less than average, even after a decade of drought,” she stated. “Other producers reported reduced conception rates and increased abortions.”

“Cattle want to turn and fight herding dogs because they have been harassed by wolves. Sometimes, we have completely lost the ability to actively manage the herd,” Urbigkit adds.

Urbigkit shares the impact of large carnivore depredation is not shared equally.

“Some producers run yearling cattle and might have a better year than us some years, especially when they generally don’t have cattle in predator country year-round,” she says. “But, sometimes they have more wolf and bear depredation than we do on sheep.”

“The fact is, the livestock industry diminishes where wolves occur. One producer may avoid a portion of grazing range, while more producers give up their range completely and some go out of business,” she continues. “I’m hopeful sometime we will start to go back to having a major issue every four years like we used to. But, right now, wolves have become the coyote, as in they have become our everyday predator.”

“We live in an area of western Wyoming which has always had wolves and always will. It’s a continued cycle and something we are resigned to at this point. But, this is the cycle of what it is like to live with wolves,” she concludes.