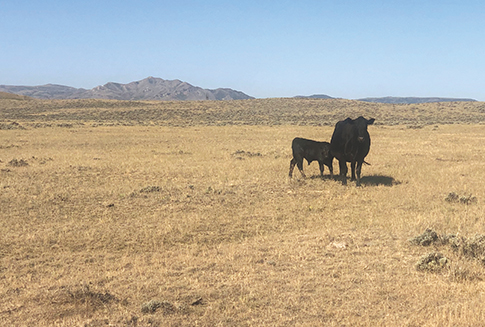 “Hot, dry conditions persisting through the early summer have taken a toll on grass growth in much of the Great Plains this year,” states University of Nebraska-Lincoln (UNL) Cow/Calf Systems and Stocker Management Specialist Dr. Karla Wilke. “We went from a really cold April to a really hot June, so our range is short on production and short on quality.”

Wilke notes one of the most common questions she gets asked is if producers can provide a protein supplement to their cattle on pasture like they do in the winter. Her answer is yes and no.

“When we provide a protein supplement such as range cubes or distillers’ grains, we provide nitrogen to the bacteria in the rumen, which helps cattle digest lower-quality forage and most likely helps them maintain body condition,” she explains. “However, this also helps them move feed through the rumen faster, increasing their intake, which is the exact opposite of our goal when we are trying to stretch our pasture.”

Instead, she references research at UNL, which has shown mixing wet distillers’ grains and poor quality forage or crop residues can replace some grass consumption, although it will likely not result in a pound-for-pound intake replacement of grass.

“The research shows this mixture gives us 0.22 pounds of grass on a dry matter basis to replace grazing forage, so the more bulky roughage we can put in, the closer we will be to a one-to-one ratio replacement,” she explains

Although many ethanol plants were shut down due to COVID-19, resulting in a shortage of byproduct distillers’ grains, most of the plants are back up and running at 80 to 100 percent capacity, according to Wilke.

“Summer is not usually a time when feedlots are using a large supply of distillers’ grains and because of the bottleneck in the feedlot sector, there isn’t a lot of distillers’ being used in feedlots,” explains Wilke. “Now might be a really good time for producers who know they are going to be short on grass to buy some distillers’ grains.”

Wilke also notes UNL research has shown planting annual forages behind irrigated wheat is a really good option for fall forage and points out this year might be a perfect opportunity for producers who are able to do it.

Another option producers may have when navigating a hot, dry summer is feeding their cattle in confinement, which doesn’t always mean keeping them in a dry lot, according to Wilke.

In fact, she notes instead of lots, producers might confine their cattle to pivot corners, fallow ground or feed ground they don’t use until calving.

“There are a lot of places producers can create makeshift confinement settings without putting their cattle out on dry pastures or putting them in a lot,” she says. “We can string a hot fence on one side, drive a truck down it and shoot our supplemental feed underneath.”

She notes if producers consider this option, they need to make sure there is plenty of bunk space for both the cows and calves and limit feed, so they can’t eat as much as they want.

“There needs to be at least two feet of bunk space for each cow and another foot for every calf,” she says.

Wilke says early weaning options may also be option, and for those producers who don’t like the idea of early weaning, creep feeding their calves is another good practice.

For late spring-calved pairs turned out with a bull, Wilke reminds producers to be aware of how cows’ plane of nutrition impacts their production and breed back.

“This might be a little bit of a sticky situation this year since heat and lack of moisture shut the grass down,” she notes. “However, even in years we thought were decent, we have had breed back issues in May calving herds, especially in young cows.”

Therefore, she believes supplementing these cattle will keep them in a high or increasing plane of nutrition and have a positive effect on conception rate.

She comments, “Every producer needs a drought plan. They need to know which cows or yearlings are going to town if they don’t get rain or are short of grass by a specified date. When they get down to the core herd they don’t want to get rid of, I encourage them to visit with Extension personnel, put together some diet options and then evaluate whether feeding those cows makes more sense than culling them.”