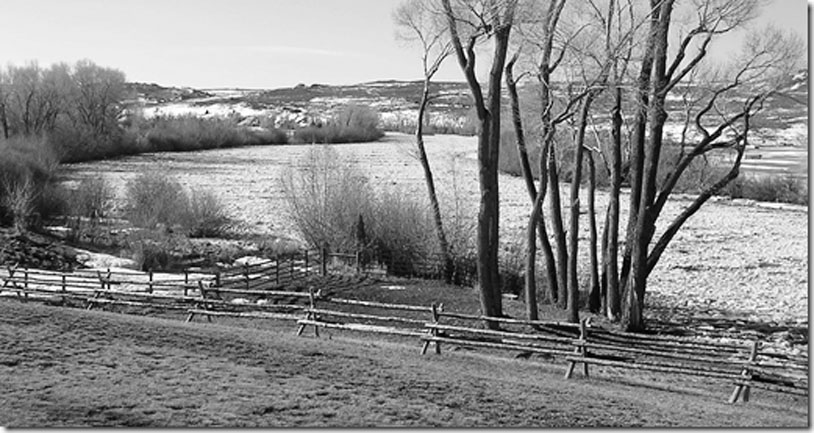 Stories of harsh winters on Wyoming ranches have been spun at the kitchen table over coffee, around the campfire and in the bunkhouse for years. A few that prevail in this area concern the winter of 1893-‘94.
Newspaper articles report that, prior to that winter, thousands of cattle roamed free year round on the grass along Pass and Lake creeks above Sheep Rock. One story notes that in the fall of that year 30,000 head of cattle grazed in the area, with only 300 head surviving the harsh winter. Another article puts the number closer to 3,000 with less than 300 surviving.
Cowboys related tales of that winter of being able to step from carcass to carcass without touching the ground during the spring roundup. Choose the story you want to believe.
One truth of the incident was that free roaming cattle herds of this area were wiped out and that ranchers would have had to start over, plus being forced to put up native hay to feed their livestock during the winter months.
Also, rural mail routes were never the same following the winter of 1893-‘94. The snow was very deep that winter across the hills, so mail contractor drivers drove their teams and buggies or sleds on the frozen river all the way from Saratoga to the mouth of Brush Creek, nearly 20 miles. The frozen river made a most excellent road for teams.
Winter was just as harsh for women of the valley, with isolation a major problem. A ranch woman wrote, “Margaret rode miles on horseback to visit her neighbor… and remembered once dismounting and crawling on her hands and knees on the icy trail. (The neighbor woman) was a valued friend and offered great help and strength. She showed Margaret how to make bread, but by the time Margaret got home the yeast foam was frozen, so the effort was a failure.”

It is not often that the Upper North Platte River is frozen solid, especially at its swift-flowing headwaters near the Wyoming/Colorado border in south central Carbon County. When it does freeze over, it’s worth a photograph such as this one provided by Chuck Sanger, a fifth generation rancher in the Saratoga/Encampment area. No date is provided for the picture. This photo and over 150 more are being preserved in a pictorial publication entitled “Historic A Cross Ranch – Conserving the Future… Preserving the Past” compiled by Dick Perue of Historical Reproductions by Perue. The motto of Perue’s retirement project is “Preserving local history… one picture at a time.”